A dozen years ago, I spent a week in Tuscany with friends, exploring the hill towns around Siena. As far as vacations go, it remains one of my most memorable for so many reasons — time with good friends, the beauty of the countryside, the kindness of everyone we met, not to mention a now-funny (not so much at the time) adventure to the Prada outlet store. 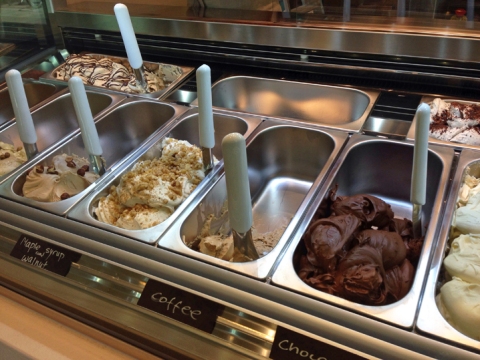 And then there was the culinary experience: the food, the wine, and places we experienced them. Before you start thinking that it was all fancy — oh, a Tuscan villa! oh the Michelin-starred restaurants! — it was nothing like that. Not at all. What has stuck with me all of these years was the delicious simplicity of the food, created and served by small, family-run businesses. Pasta? Sure, but also grilled fish, salads served family-style, roasted meats, rustic jam tarts, and acqua pazza (a vegetable soup topped with a soft-cooked egg). Most of the places we ate were selected by nothing more than a group agreement of “that looks good, let’s try it” — well, that and whether the place could seat a group of eight on short notice.

Each day, we loaded ourselves into our economy-style rented van (hard seats, bumpy ride, hot and stuffy for those sitting in the back, and just a whisper of air conditioning) for an adventure to a different hill town: Montalcino, Montepulciano, San Gimignano. We’d sightsee, have a leisurely lunch, and around mid-afternoon, someone would suggest gelato. By the end of the trip, it was a given: the afternoon gelato break. We’d find a little cafe or gelateria and, after several tastes, make our choices. I loved that you could combine two or three different flavors in a small cup — enough to enjoy every bite without feeling overwhelmed. A well-made, flavorful, small portion of gelato was more satisfying than a double-scoop of any chain-store ice cream I’d tried.

So, what’s the difference between gelato (the word for “ice cream” in Italian) and, well, ice cream? It comes down to fat, air, and temperature.

Fortunately, you don’t have to run off to Tuscany to have your own afternoon gelato break. Locally owned Gelataio, which makes small-batch, Italian-style gelato has just opened in Palo Alto! With a commitment to using locally sourced, organic, and seasonal ingredients, they’re creating some luscious gelato that reminded me of what I experienced in Italy.

For a shop that’s barely been open for three weeks, they’re off to a good start. The counter staff is friendly, knowledgeable about the flavors, and willing to answer questions about ingredients. The current flavor selection is small — 10 flavors of gelato and 3 flavors of sorbetto — but the selection is evolving and more flavors will be added in the future. (Coming soon: Daily flavor lists posted to their Facebook page.)

Just some of the gelati at Gelataio in Palo Alto: Chocolate, Vanilla, Stracciatella (chocolate chip)

The flavor assortment includes classics such as Chocolate, Stracciatella, and Hazelnut, as well as more unique flavors like Earl Grey and Cajeta (caramel). Tastes are available, if you want to “try before you buy” or just can’t make up your mind.

Gelataio offers two sizes of cups and cones for gelato and sorbetto: small, which holds up two flavors and regular, which holds up to three flavors. I opted for the regular (hey, it was a late-lunch day) with Chocolate, Pistachio, and Cajeta. 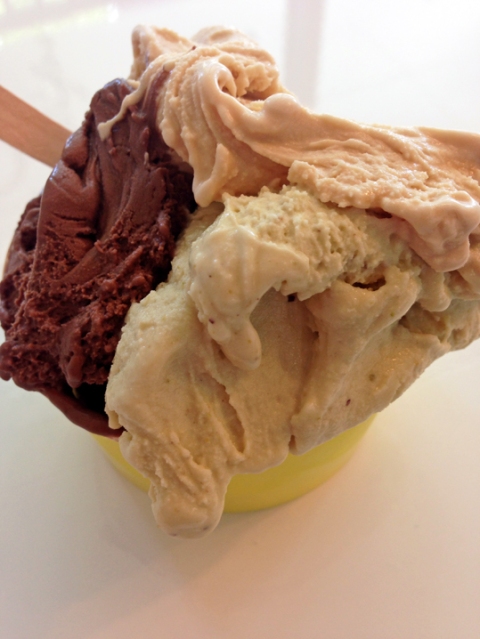 Gelataio’s Chocolate gelato is a must for chocolate lovers. It has a rich, dark, cocoa flavor that isn’t cloying or powdery. The Pistachio was another wonderful surprise: the nutty, rich flavor was like eating a light, sweet, creamy pistachio butter. The Cajeta was one of the sweeter flavors I tried; it didn’t have as much of a true cajeta flavor as it did a sweet, light-caramel flavor. Flavor-wise, it’s milder than the Chocolate and Pistachio, so keep that in mind if you decide to pair it with another flavor.

I tasted, but didn’t order the Earl Grey — but it’s on my list for next time. This flavor reminded me of a favorite cup of tea with cream and sugar, without overdoing the bergamot. Another standout taste was the Green Tea sorbetto. Sorbettos are dairy-free, but with the same rich creaminess as the gelatos. They’re less icy and taste less syrup-y than American-style sorbets. Need a treat to go? Gelataio also sells chocolate-dipped gelato “pops” on a stick.

The shop has tables inside, as well as outside, where you can sit and enjoy your gelato. During my recent afternoon gelato break, two ladies came into the shop — one Italian, one American. The American lady, translating for her friend, placed their orders. When the staff asked if Gelataio’s gelato was authentic, the Italian lady gave a big smile and said — “Italian,” emphatically. I’d call that an endorsement.

Have you tried Gelataio yet?

You are currently reading Eat Local: Gelataio in Palo Alto at 650Food.