Phew! December has been a whirlwind, hasn’t it?! Between end-of-the-year everything (and if you’re a business owner and/or financial type, you definitely know what I mean), not to mention the onslaught of holidays, there’s hardly been time to catch up. And yet, here we are at the tail end of 2014! The Winter Solstice has come and gone, and tonight is Christmas Eve and the last night of Hanukkah. In less than a week we’ll be kissing it all goodbye and saying hello to 2015. 2015 already! I don’t know about you, but I’m ready for some downtime. A break in the action. I’m jumping into pajamas and mixing up a Christmas Toddy to sip while wrapping those last few gifts and enjoying a little peace on earth. Or, at least in my living room.

What you need: a Christmas Toddy (and maybe some panettone, too)

What’s a toddy, you ask? Merriam-Webster Dictionary defines a toddy as “a usually hot drink consisting of liquor (as rum), water, sugar, and spices.” Generally I’m not a fan of hot drinks (the occasional cup of tea is about it for me), but this time of year, sipping a hot toddy just seems so… holiday-like.

My Christmas Toddy has its roots in a hot-buttered rum recipe I found many years ago in a half-price bar book, long-since donated or lost in the debris of packing up and moving. Spices, tea, and rum are the key ingredients here. I like to keep it as local as possible, so I’m using local, raw honey and lemons from my backyard. Captain Morgan’s is my dad’s drink, and it just seemed like the right rum for this cocktail. I think the tea adds a bit of body to the drink and rounds out the flavor profile.

So get yerself one of these, find a peaceful spot, and just relax. Wishing you all a very happy holiday season! 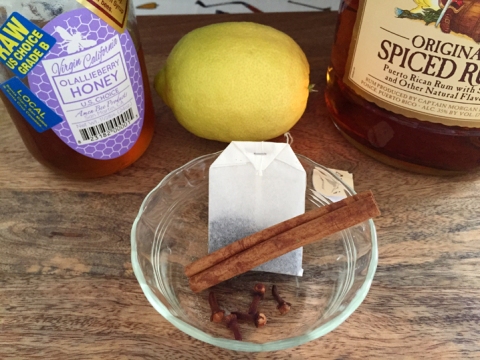 You are currently reading Hello, It’s Me: Christmas Toddy at 650Food.