Off the Grid (OTG), San Francisco’s rapidly expanding food-truck palooza, has been spreading the food-truck love to parts outside the city for the past couple of years. What does that mean for those of us who reside in the 650? We can now experience food-truck dining closer to home just about any night of the week! 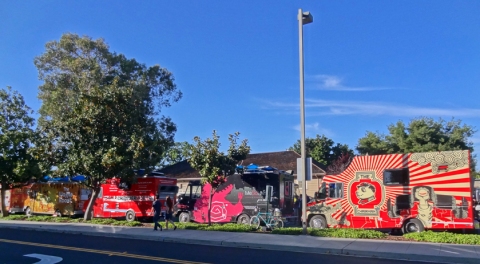 Off the Grid in Menlo Park

Off the Grid has wisely set up shop in or near CalTrain station parking lots. Most of these stations are within walking distance to the town center, and nearby parking is generally free and accessible. And, of course, if you’re a CalTrain commuter, you can easily pick up dinner on your way home. In warmer weather (that would not have been this week, by the way), it’s a great place to take the fam or meet up with friends for a quick, casual weeknight dinner. With a variety of food trucks — about nine trucks, depending on the week and location — there’s a dining option for everyone. Asian variations, Latin variations, waffle variations — and, of course, cupcakes — are generally on the agenda. Most trucks offer a vegetarian option or two, and some even offer gluten-free choices. 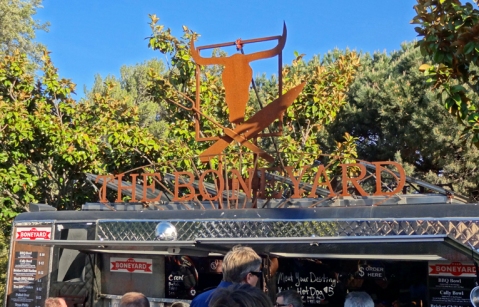 The Boneyard truck at Off the Grid in Menlo Park

Hitting Off the Grid in Menlo Park last week gave me the chance to try out two trucks that had been on my list: The Chairman and El Sur Empanadas Artesanales.

The Chairman, which has been part of Off the Grid since the first event at Fort Mason in 2010 (ongoing, Friday nights 5-11pm), specializes in gua bao: a small sandwich made with meat or vegetables, served on a steamed or baked bun. Their menu has five options, including:

Keeping it light, I chose the Crispy Miso Cured Tofu on a steamed bun. The steamed buns are light and fluffy, while the tofu has a flavorful, crisp crust. Add some sriracha, and you have a nice Asian-style street taco that hits all the right notes for flavor and texture. Delish!

Having satisfied my craving for Asian-style street food, I wandered on over to El Sur’s Empanadas Artesanales for a taste of South America. After visiting Chile and Peru last year, I’ve been taste-testing empanadas every chance I get, so I was looking forward to trying El Sur.

How much is that empanada in the window? (El Sur )

Like most food trucks, they keep the menu short with about half a dozen choices and include two vegetarian options. Despite my recent personal failure with Swiss chard, I went with the Verde: Swiss Chard, Spinach, Onions, Five Cheeses, Hard Boiled Egg, Olive (actually, I think it was the “5 cheeses” that helped make that decision!). The pastry was thinner than I expected, crispy on the edges, and softer in the center. The filling was savory, creamy, and cheesy. About halfway through, I was wishing that I had ordered a second empanada to have for breakfast the next day. So good!

We’re expecting some warmer weather next week, so it’s a good opportunity to get out and have a weeknight dinner at an Off the Grid event near you. Here’s the summary of Off the Grid’s peninsula schedule:

Check out Off the Grid’s website for a detailed schedule and updates on which trucks will be attending. (Best to check the day of for updated truck info.)

And if you find yourself near Fort Mason on Friday night, definitely check out the Off the Grid event there — the original and largest food-truck event in San Francisco (just, you know, take a jacket… and a blanket).

You are currently reading Field Trip: OTG in MP at 650Food.