This is a story of how best-laid plans and good intentions kinda went off the rails. ICYMI, January 26 was Australia Day. Kind of a big deal — national holiday and all that — Australia Day is the anniversary of the arrival of the First Fleet at Port Jackson, aka Sydney Harbor. Lacking a better analogy, it’s like 4th of July for Australians. 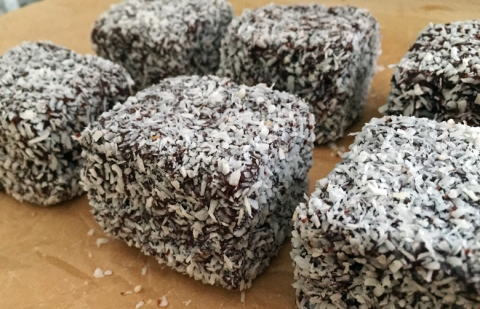 A lamington, if you’re not familiar with this staple of Australian bakeries and home cooks, is a square or rectangular slice of yellow sponge cake, dipped in chocolate icing and then rolled in shredded coconut. (Hello?! Yum!) There are fancy variations as well — cream-filled, jam-filled, cream and jam-filled, and custard-filled – but the classic lamington is the most common and probably best-loved. They’re the stuff of school lunches and childhood birthday parties.

It’s been a year or so since I’ve made lamingtons, but my last batch was pretty damn good. The recipe, which I adapted from The Australian Women’s Weekly Easy Entertaining Cookbook, worked perfectly. Putting my CIA training into practice, I made the cake a day in advance, then cut, iced, and finished the lamingtons the next morning. Voila!

I figured I’d assemble the whole shebang in 15 or 20 minutes and relax for the rest of the day. I dipped the first cake into the icing, then rolled it in coconut. Perfect. The second one? Not bad, but things were already getting a bit sticky and crumby in the icing bowl. By the time I got to the fourth and fifth cakes, the icing was cooling a bit and sticking to me, the bowl, and the counter, but not to the cakes. Nope, in fact, I was losing half the cakes in the icing bowl; they were breaking as I lifted them out! WTF?!

After reviewing the recipe, reheating the icing multiple times, and finally remaking the icing, it dawned on me: I hadn’t let the cake rest long enough. <groan> It was way too delicate to ice so soon after baking and needed to “stale up” a bit,  either by sitting on the counter uncovered overnight, or in the refrigerator for about six hours. Ugh.

And this is why you want to make notes on your recipes. Those little things that you add or change — or that didn’t work. Yeah, you want to remember those when you go back to a recipe months or even years later. So, note to self: next time make the cake a day in advance and let it dry out a bit! In the end, I muddled through and finished the batch, but not without some casualties and a lot of frustration. Don’t make the same mistake. Always read recipes before you start cooking and make notes when you’ve finished. You’ll thank yourself later.

The lamington sponge cake is light and buttery, with a texture that falls somewhere between a chiffon cake and a classic American butter cake. Be sure to let it rest and dry out a bit overnight before cutting, icing, and finishing in coconut. Freshly made sponge is too delicate for the sticky chocolate icing and will crumble as you dip the pieces.

Part I: Sponge Cake
Make sure all ingredients are at room temperature before making the cake. I typically bring eggs to room temperature by setting them in a bowl of warm water for 15-20 minutes, although you might find eggs are easier to separate when they’re cold.
Tip: Place plastic wrap directly on the yolks after separating eggs, to prevent the from drying out or getting a “skin.” 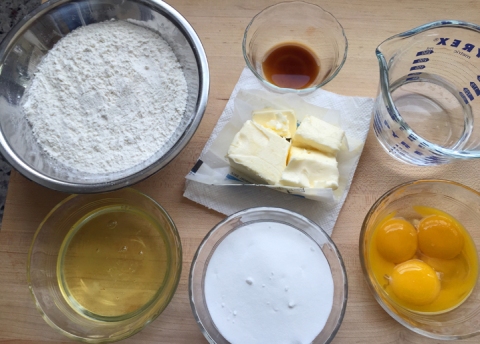 Part II: Chocolate Icing and Assembly
Make sure you prepare the cake and set up your “assembly line” before making the chocolate icing so that you can start dipping cakes right way. The icing sets up quickly, particularly in cool weather, so work efficiently. If the icing gets to firm or sticky, reheat in the microwave as necessary.

You are currently reading Lesson Learned: Making Lamingtons at 650Food.