Happy Pie Day! (No, not Pi Day — that’s in March, natch.) If you didn’t know, January 23 is the official day to indulge in that comforting, flavorful, make-me-feel-like-a-kid-again combination of flaky, tender crust and your favorite filling. Whether you like fruity, creamy, nutty, crunchy, hot, cold, room-temperature, you name it, there’s a pie for you. 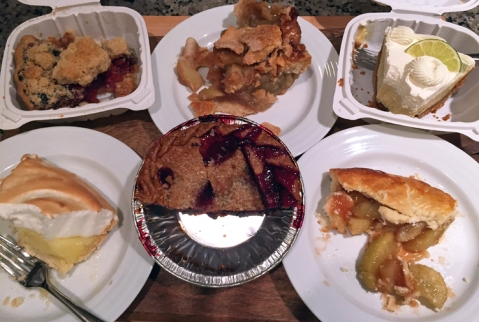 I’ve yet to meet anyone (any American, that is) who doesn’t like pie. Some people are iffy about ice cream, marshmallows, chocolate, certain kinds of cake. But not pie. Seems like everyone likes pie. Apple is still the favorite of most Americans, but cherry, blueberry, pumpkin, and lemon meringue have plenty of fans too, according to the National Pie Council.

Good pie means something different to everyone, but it really comes down to the execution of — and balance between — the crust and the filling. Texture and flavor must play well together for a good pie, but that means something different for every pie lover. Do you prefer flaky crust or crumbly? Slightly undercooked and golden or brownish and crispy? And what about the filling? Sweet? Tart? And how much? What about that filling-to-crust ratio? Does your favorite pie have just enough crust to barely hold in a mound of filling, or is the crust substantial enough to stand up to the filling and play an equal part?

The best pies are homemade, but what if you’re baking-challenged or just plain don’t have time to knock out some homemade-pie lusciousness? Where in the 650 can you go to get your local pie fix — beyond the obvious options of chain grocery stores and Costco? Well, turns out that there’s no easy answer to that question. Unlike San Francisco, which seems to be experiencing a handcrafted pie renaissance (Mission Pie, Three Babes Bakeshop, Tartine… need I go on?), the Peninsula isn’t experiencing the same kind of pie love. Sure, we’ve got some fine bakeries and a growing number of European-influenced patisseries with tarts, galettes, and cakes, but when it comes to good ol’ American pie…hmmm, not so much. You need to do some sleuthing to find a reasonable variety of fresh, locally baked pies here in the 650.

If you’ve got some time on your hands, and the weather is fine, you could take a drive over to Highway 1 and down the coast to Duarte’s Tavern, whose ollalieberry pie was anointed one of the country’s best pies by Life Magazine in 2005. Or, keep heading south on Highway 1 to Davenport and pick up a fresh-baked berry pie at Swanton Berry Farm’s Farm Stand. If you can plan ahead or schedule your pie cravings, there are some talented small-batch bakers who sell their treats at weekend farmers’ markets, when the markets are in season (sigh, how I miss iPie!). But where can you go to pick up a freshly baked pie (or even a slice!) any day of the week? After some sleuthing and taste testing, here are three options to try.

Palo Alto Creamery (Palo Alto)
If filling is your favorite part of pie, then Palo Alto Creamery’s pies are for you! The Creamery’s crust is flaky, but thin, which means that the filling is definitely the star. Note that fillings tend to be on the sweet side, so if you like sweeter pies, The Creamery’s got you covered. The apple pie has a double crust (pie shell with top crust to encase the filling), with a mound of chunky-applesauce-like filling. Blueberry is also a double-crust pie, while cherry has a butter-crumb topping. 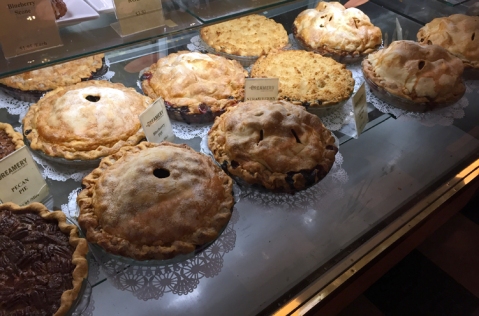 Eat in or Take Out: Both. Their whole pies are big, resulting in generous, thick slices.
Good to Know: When ordering to go, head to the bakery case at the back of the restaurant. Fruit pies are kept in the bakery case, but cream pies are kept in a refrigerator behind the counter. Be sure to ask the counter staff for a full list of the daily pies.
Flavors: Half a dozen or so classics, including apple, blueberry, cherry, chocolate cream, banana cream, key lime.
Price: $4.95/slice or $24/whole pie, plus pie plate deposit
Eat This: Key lime has a sturdy (not soft or soggy) graham cracker crust and creamy, balanced sweet-lime filling that wasn’t too sweet or too tart. I couldn’t stop eating it. 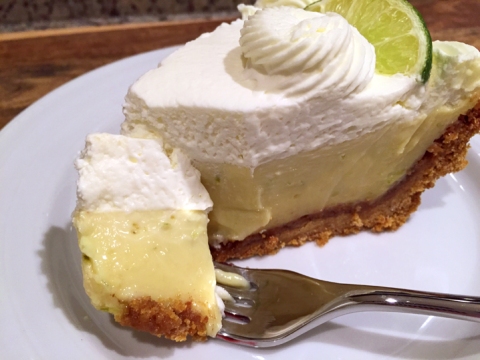 Pilgrim Kitchen Bakery & Donut Shop (Belmont)
This pink and green shop sits right on El Camino Real in mid-Belmont. While they’re known for their donuts, they have some of the best homemade pies I’ve tasted. 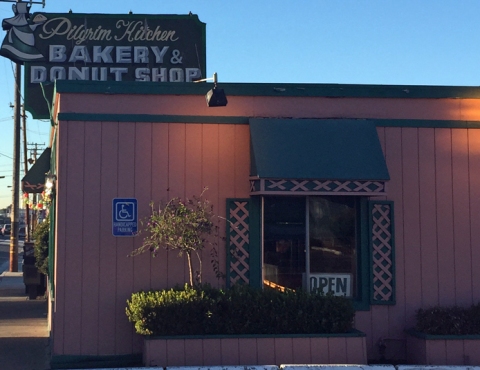 Pilgrim Kitchen gives equal billing to both the crust and the filling. Crusts are golden brown, flakey, and fork-tender. Fruit pies are double-crusted, and the fillings are balanced perfectly with the thickness of the crust. It’s not all about one or the other, so filling and crust lovers would both be happy with Pilgrim Kitchen’s pies. The apple pie contains fresh, al dente pieces of tart apple. If you like a firmer apple pie, this one’s for you.

Eat in or Take Out: Both. The shop has indoor and outdoor seating; order and pay at the counter, then find a place to sit. Whole pies are standard 9″, and slices are about 1/6th of a pie.
Good to Know: Whole pies are in the case to your left and in front of you as you enter the shop. Ask which flavors are available by the slice.
Flavors: A dozen or so classics: apple, berry, cherry, coconut cream, pecan, lemon meringue. Call ahead for a full list.
Price: $3.50/slice or $12.95 – $14.95/whole pie, depending on the flavor
Eat This: The lemon meringue pie is heavenly. A flaky crust provides the base for a layer of creamy, pale-yellow, tart lemon custard, topped with an airy, melt-in-your mouth cap of meringue. 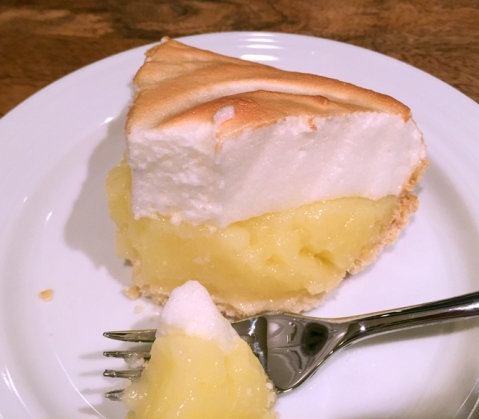 Whole Foods Market (Redwood City, plus three other locations)
With a commitment to healthy ingredients and fresh food, Whole Foods fills that niche between neighborhood bakery (which seem to be few and far between in the 650) and the everything-to-everyone grocery store chains. What you might not know? Whole Foods makes their own pies in-house — from scratch. 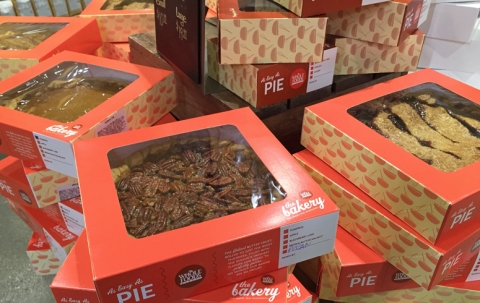 Whole Foods In-House Pies: Make sure you get the orange box

Want to know when your pie was baked? Check the ingredient label. Whole Foods’ pies have a high filling-to-crust ratio, with a crust texture that falls between flaky and crumbly. The crust also has a nice, rich brown color, indicating that it’s been well-baked without being too crisp or having that slightly bitter edge of an over-baked crust.

Eat in or Take Out: Well, it’s a grocery store, so you’re likely to take out. But if you can’t wait, most WF’s have a seating area at the front of the store where you can tuck in to your pie.
Good to Know: Local, in-store-made pies are in the orange boxes. Pies in white boxes arrive frozen from the corporate bakery and are baked, but not made on-site. Locally made pies cost more.
Flavors: No cream pies. About half a dozen flavors, mostly fruit: apple, berry, cherry, pumpkin (seasonal), pecan.
Price: $10.99 for small (4″) or $19.99 for large (9″)
Eat This: Blackberry-Lime. A double-crusted pie with a jammy-blackberry filing that has a hint of lime and whole berries. No mushy filling here. Interesting blend of sweet and tart, with the filling in the starring role (although the crust is a good filling-delivery device). 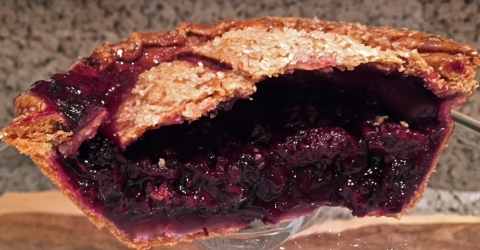 Whole Foods Blackberry-Lime Pie: Half for me…

Of the three, I’d say Pilgrim was a surprise favorite — and I’ll go back for more. Where do you go for pie in the 650? Share your favorites, and I’ll post an update!

You are currently reading Eat Local: American Pie at 650Food.