The Redwood City restaurant boom continues with this week’s opening of Howie’s Artisan Pizza. Taking over the old Tarboosh spot on Jefferson Avenue, Howie’s brings chef/restaurateur Howard Bulka’s casual pizza concept to the mid-Peninsula. Bulka, former chef/owner of the (now closed) Marche Restaurant in Menlo Park, opened the first Howie’s Artisan Pizza in November 2009 in the Palo Alto Town & Country shopping center. The Palo Alto Howie’s has done well with steady business, particularly on weekends and throughout the summer when it packs out with local families.

Think of the Redwood City location as “Howie’s 2.0” — an expansion of the Palo Alto concept, according one staff member. The new space echoes the casual feel of the Palo Alto location, but has more outdoor seating, with the large side patio area that’s set up for year-round dining. About half of the patio area is covered, but tables in the open area have umbrellas to shade diners from the summer sun. For chilly days (or evenings), overhead heaters provide warmth. The interior of the restaurant is large and casual with front doors that open completely, bringing the outdoors in and giving the restaurant an airy feel. Seating is at individual tables or the long bar, which runs the length of the dining room.

What is new in the Howie’s concept is a full bar program that not only includes beer and wine, but also handcrafted cocktails. Howie’s Bar Manager, Ryan, is ramping up the cocktail program slowly, presenting an approachable menu of classic cocktails with contemporary twists. For the house Mai-Tai, Howie’s bartenders muddle fresh almonds with Demerara sugar to elicit an aromatic, fresh almond flavor that plays beautifully with the dark rum.

Can’t get to the beach? Take a tropical break with Howie’s Mai-Tai.

Ryan’s Pisco Punch is a take on the classic Pisco Sour (pisco, lemon juice, sugar, and egg white) that uses house-made pineapple gomme syrup. And then there’s The Heat of Passion, which had me at hello. Don Julio Reposado tequila, passion fruit and lime juices, along with a hint of Calabrian chili. ‘Nuff said.

In The Heat of Passion in the 650: Sweet, tart, and just enough spice

And this is just the start. Plans are in the works to add seasonal cocktails, infusions, and housemade bitters and tinctures.

Cocktails not your thing? The beer menu includes about a dozen craft beers on tap, most from around California. Craving a Bud Lite or classic PBR? Yeah, they’ve got that, too. The wine list has something for just about everyone, from crisp whites that will be perfect sipping on warm summer days to fruity, rich reds to pair with red-sauce pizzas. (Although white wine drinkers might prefer to see a few more white wine choices, including a by-the-glass option for the lovely Flowers Chardonnay.) Of course, non-alcoholic options, including soft drinks, are available as well.

With drinks squared away, you’ll be ready to move on to the food menu, where comfort food is the theme. While pizza is the main draw, the food menu also offer small plates/appetizers, meal-sized salads, and sandwiches (listed as “Burgers and Such”). Not sure what to get? The servers are knowledgeable and happy to offer suggestions and tell you about items unique to the Redwood City menu, such as the small plates Eggplant Pillows and Burn Your Fingers Shrimp.

The Eggplant Pillows are long, thin slices of roasted eggplant rolled around a dollop of fresh, housemade ricotta cheese and topped with salsa verde. Tempting, but I opted for aptly named Burn Your Fingers Shrimp. Six large cajun-spiced peel-and-eat shrimp are served sizzling hot with melted, browned butter in small skillet, along with two pieces of toasted bread for mopping up the extra browned butter.

Moving on from Small Plates, you’re likely to skip right on over to the Pizza section of the menu. (I’m not saying you should, but Howie’s is a pizza joint, after all.) What makes a “good” pizza is a completely subjective thing. For some people, it’s all about the toppings. For others, it’s all about the crust. If you’re a crust fanatic, Howie’s falls somewhere between a Neapolitan and New York style pizza. Crispy on the bottom, this is no cracker-like crust; it’s got some depth and chewiness, thanks to a sourdough starter. The crust is sturdy enough to stand up to meat and vegetable toppings, and there’s an even balance between toppings and crust.

Toppings are fresh, and you can choose from the nine classic combos, or come up with your own. House favorites include the Margherita (red sauce, mozzarella, fresh basil), Sausage and Peppers, and Arugula and Prosciutto.

It’s a complete meal: Arugula and proscuitto with fresh mozzarella and a hint of creamy garlic sauce on the base

If you don’t feel up to consuming a full-sized pizza on your own, Howie’s offers a smaller Petitz’a, which is their individual-size pizza, for about half the price of a full size. Any pizza on the menu is available as a Petitz’a.

Sharing with someone else and can’t decide between two favorites? You can get a full-sized half-and-half pizza for a small upcharge ($1). (Half-and-half is not available in the smaller, Petitz’a size.) 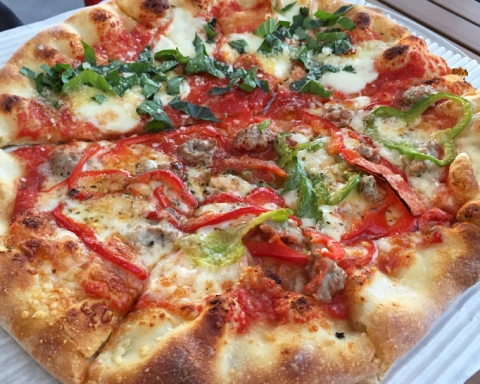 Can’t decide on just one? Try this half-n-half: Sausage & Peppers and Margherita.

If you’re eating light and opt for a salad, know that Howie’s salad plates are substantial — plenty for a meal or to share if you’re also splitting an appetizer or a pizza. Among the five salad choices are classics, such as Mixed Greens and Caesar. You can add grilled chicken to any salad for an upcharge.

If you’re pizza-ed out or just looking for something different, check out the Burgers and Such section of the menu. Options include a variety of sandwiches from the Howie’s Burger (pepper jack cheese, grilled onions, lettuce, pickle, and of course, a secret sauce) to a classic grilled cheese with marina sauce for dipping (perfect for the kids). Non-meat and vegetarian options are available, including a Caponato Melt with eggplant, peppers, onions, zucchini, olives, mozzarella, fresh basil, and parmesan.

Phew! If you’ve still got room for dessert (you go!), Howie’s does offer a few home-style, comfort-food choices: Banana Cream Pie, Seasonal Fruit Crisp for Two, and a Cookie Plate. Servers tell me the Banana Cream Pie is a good bet, but I’ll have to report back on that at a later date.

Although Howie’s “opened quietly this week,” as Bulka put it, it’s not likely to stay quiet for long. Bulka and staff are chatting with customers, taking suggestions, and tweaking things to, as Bulka put it, “get it right.” They’re definitely on their way. With a casual vibe, comfort-food menu, plenty of seating, and central Redwood City location, this could be your new mid-Peninsula spot.

Have you visited the new Howie’s Artisan Pizza in Redwood City yet? Share your experience in the comments below or on our Facebook page.