When I’m looking for a peaceful getaway beyond the 650, I head north to West Marin county. Crossing the Golden Gate Bridge and turning onto Highway 1 brings a sigh of relief as you’re forced to slow down and enjoy the scenery — from the rugged coastal areas as you wind your way down to Stinson Beach, to the glassy beauty of Tomales Bay as you head north to Marshall, and finally to the peaceful, pastoral lands as you make your way east toward Petaluma.

Looking at Point Reyes Beach on the way to the lighthouse

If the natural beauty isn’t enough to entice you, West Marin is rife with history and a rich heritage when it comes to food production. Dairy and cattle ranches have populated Marin county since the 1860’s. Most of these are family-run farms (not “big ag” operations) that have passed from one generation to the next, or between families, as they keep Marin County’s agrarian heritage growing. Traditional, organic, and sustainable have become a way of life among West Marin’s food producers.

From grower to producer to chef, the local food system is thriving. Marin’s farmers provide the organic, sustainable, raw ingredients — dairy, produce, meat — that today’s artisan food crafters and chefs rely on to make their products.

The past two decades have seen the rise of award-winning cheese producers, with Cowgirl Creamery leading the way. (See also Tomales Farmstead Creamery and Point Reyes Farmstead Creamery, among others.) Farming isn’t limited to the land; shellfish is also a top local “crop.” Tomales Bay produces some of the finest west coast oysters you’ll ever try — not to mention mussels and clams. Restaurants like Stinson Beach’s Parkside Cafe and Osteria Stellina in Point Reyes Station rely on local ingredients to create satisfying, delicious dishes.

Unique among West Marin’s artisan producers are Jan Lee and her husband Lou, owners and farmers of AppleGarden Farm orchard in Tomales and makers of handcrafted AppleGarden Farm Hard Cider. A two-person operation, they have spent the past eight years planting, growing, and harvesting 40 varieties of apples on their 20-acre property in order to create Marin county’s only organic farmstead hard cider. Jan calls it their “retirement project.” (And if that weren’t enough, there’s also the AppleGarden Cottage bed and breakfast, which Jan started up while waiting for the apple trees to mature enough for the first bottling of cider.) 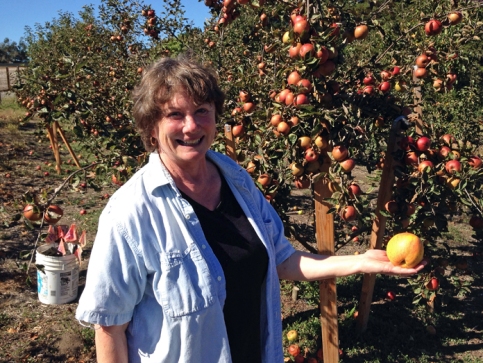 Jan Lee in the orchard of AppleGarden Farm during harvest time

Hard cider, which seems to be on trend lately, isn’t new. In fact, hard cider was the colonists’ original tipple. Cider apples — which are more tart and tannic than the apples we see in the market today —  were cultivated by English settlers, and the drink enjoyed popularity until Prohibition. The Volstead Act not only outlawed alcoholic cider, but it also limited the production of cider apple orchards and even sweet cider, also known as apple juice. As a result of Prohibition, orchards of cider apple trees were replaced with trees producing the sweeter eating apples we know now. But Jan Lee is doing something about that.

After leaving behind stress-filled careers managing commercial construction projects up and down the West Coast, Jan and Lou purchased their property in Tomales in fall 2007. Their plan: grow their own apples and make a flavorful, traditional English-style cider using a natural fermentation process that required only fresh juice and yeast. Together they built a barn, which they lived in until their residence on the property was complete, and planted the first apple trees. The first harvest produced enough apples for Jan to make “lots of applesauce.” Harvesting for making cider started in 2010, with the first bottling in 2011.

Eight years on, Jan and Lou have a two-acre orchard of over 300 apple trees that provide the apples for their hard cider. In addition, the farm is home to approximately 30 pastured chickens (who Jan calls “the girls”).

Two of “the girls” taking a stroll in the apple orchard

In previous years, when the drought wasn’t as severe, Lou has also indulged his passion for “growing things,” including Cinderella pumpkins, summer squashes, and strawberries. Aside from the apples for cider, whatever Jan and Lou don’t eat or put into cold storage goes to feed the chickens and livestock on neighboring properties.

Biodiversity and sustainability were built into the plan for AppleGarden Farm. With a variety of 40 apples, some types, such as the crabapples, attract pollinators and add a tannic (dry) component to the cider blend. (In fact, Jan and Lou keep bee boxes on their property, although a beekeeper manages the bees.) Cider apples contribute tannins and tartness, while the sweeter apples, such as Elstar, Stayman Winesap, and Freedom allow Jan to play with the sweetness and flavor profile when blending the cider. The diversity of apples means a ripening season from late August through early November. Lou harvests the apples by hand when they’re ready, and nothing goes to waste or is left lingering on the tree. Fruit that falls from the tree on its own is left on the ground to become food for the chickens, who in turn, provide nitrogen-rich fertilizer (manure) throughout the orchard.

Jan and Lou specifically chose trees that would thrive in their coastal region, accounting for foggy mornings and less-sunny summers than inland locations in Sonoma county, for example. Young trees, which take several years to produce apples, receive a small amount of drip irrigation as needed during the summer. Mature trees are dry farmed. Jan and Lou also use large amounts of local organic mulch to keep the soil moist following winter rains. 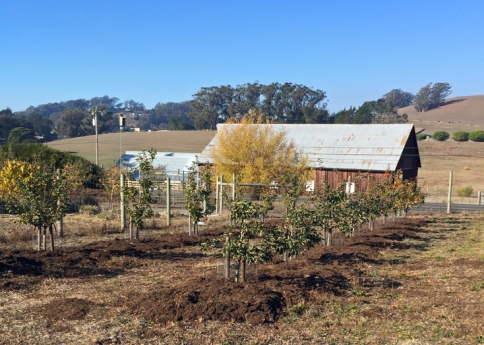 Apples are allowed to rest in picking boxes until Jan and Lou are ready to start pressing.

Using a new press that Lou built this year, they’re able to extract the maximum amount of juice from the apples. Leftover apple “smoosh” from the pressings becomes feed for neighbors’ livestock. Juice is combined with yeast and left to ferment in large barrels at room temperature for several weeks.

Jan uses commercial yeast for consistent results, but nothing else is added to the cider — no sugar, no flavorings, and no additional carbonation. She tests the cider for percentage of alcohol (maximum 7%) and sugar, acidity, and flavor. Adjustments are made by adding juice — more juice to reduce the percentage of alcohol, tannic juice to balance sweetness and so on. This is the art of blending, and Jan is very good at it.

Two more stages of fermentation, which take the better part of a year in cold storage, happen before the cider can be bottled. Jan and Lou do the bottling on site themselves, using bottling equipment that Lou built. Labels are applied by hand, and Jan delivers the orders herself, driving up and down Marin county to deliver orders to wholesale accounts, of which there are now a dozen.

AppleGarden Farm’s Hard Cider has a moderate amount of alcohol, balance of tannins and sweetness, slight effervescence and sweet-tart apple flavor. Jan calls it a “casual drink, a picnic cider.” 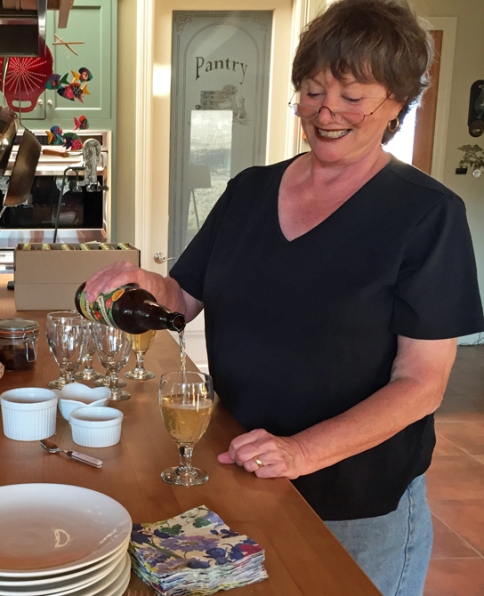 Jan Lee pouring a glass of her handcrafted farmstead cider

The flavor profile makes it a perfect pairing with Marin county-produced foods — especially full-flavored cheeses such as Cowgirl Creamery’s Mount Tam. Goat cheeses are also a good pairing, and I’m looking forward to trying the cider with Pescadero’s own Harley Goat Farms cheeses.

Another excellent cider pairing? Tomales Bay oysters! In fact, it’s my new go-to choice of beverage to enjoy with our regional oysters, emphasizing the creaminess and balancing the briny notes.

Unfortunately AppleGarden Farm Hard Cider is not yet available in the 650. If you want to try this handmade, sustainable cider for yourself, you’ll have to head to points north and get some from these restaurants and specialty stores:

Better yet, plan a trip to West Marin when the farm is open and purchase some directly from Jan. Check the farm’s Facebook page for open days and times.

You are currently reading Waste-Less Wednesday: Sustainable Cider from AppleGarden Farm at 650Food.